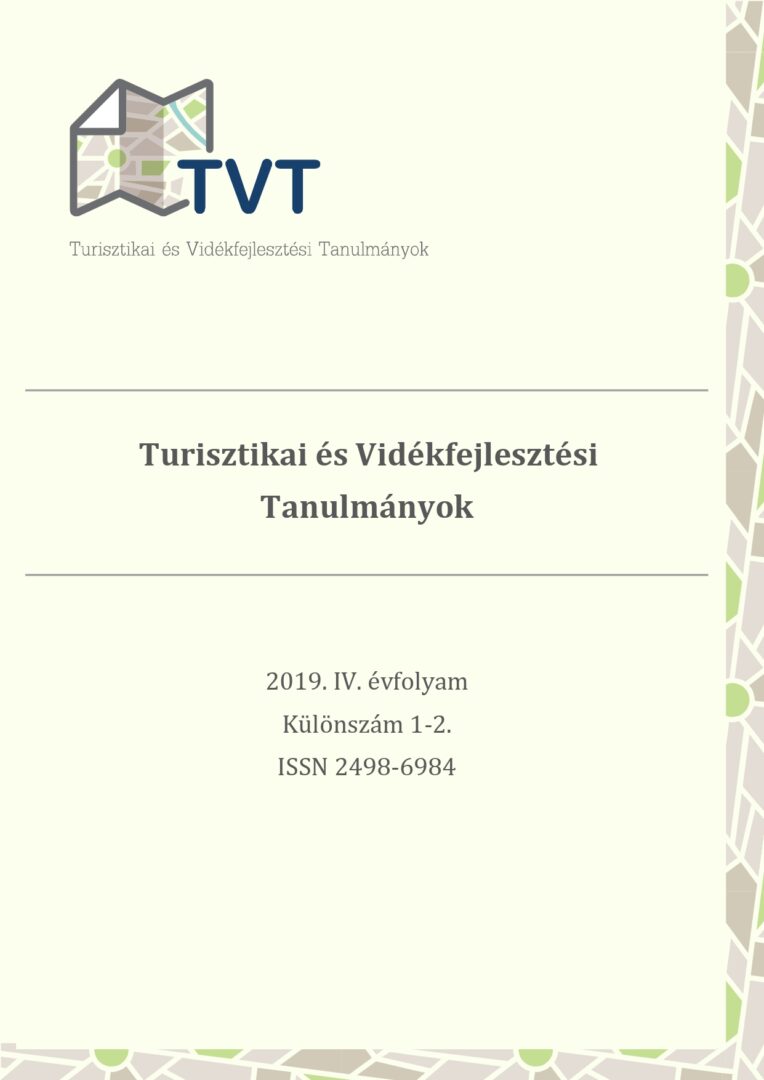 the special issue of the periodical Turisztikai és Vidékfejlesztési Tanulmányok (Tourism and Rural Development Studies) is the fruit of a quarter-of-a-century cooperation of an academic community created by social geography experts of the institutes of geography from six universities (Pécs, Graz, Maribor, Plzeň, Bratislava and Bayreuth). The cooperation is maintained in the form of an annual conference organised by the members in a rotation   system. The topic of the conference is announced by the host institute in each case, and the official languages of the conferences are English and German. An event in the series of the programmes was the conference held in Villány, Hungary on 20-22 September 2018, called “Annual Meeting of the Hexagonal Research Group – Co-operative settlement, creative region”. The programme was organised with the kind support of the tender project EFOP-3.6.2-16-2017-00017, titled “Sustainable, intelligent and inclusive regional and city models”, managed by the Department of Tourism at the Institute of Geography and Earth Sciences of the Faculty of Sciences, University of Pécs. The topic of the conference was compatible with the objectives of the tender.

Several presentations were held at the conference, 11 of which are hereby published in the form of papers, in collaboration with the editorial board of Turisztikai és Vidékfejlesztési Tanulmányok. It is to our greatest pleasure that the papers, in an unusual way, cover the most diverse issues, enlarging thereby the range of topics of interest to our readers. The papers published do not only demonstrate the general issues of tourism but also feature spatial structural analyses, local and regional tourism management trends, and also papers dealing with the exploration of national and regional level correlations of regional development policy.

We also recommend this special issue to those readers of Turisztikai és Vidékfejlesztési Tanulmányok who want to get a broader picture of the practice of spatial and rural development not only in Hungary but also in other European countries. The case studies on these issues may give several ideas to those interested in the topic.

The paper in hand investigates the situation of farmers in the municipality of Leibnitz/Styria. The focus lies on direct marketing by farmers and those who are planning to go that way in future.

END_OF_DOCUMENT_TOKEN_TO_BE_REPLACED

Bence Závodi – Géza Szabó: THE CORRELATION OF THE FAME OF WINE REGIONS AND WINE GASTRONOMY FESTIVALS IN THE PANNON WINE REGION

The Pannon Wine Region is one of the enological tourism centres of Hungary from both (wine) professional and tourism aspects, but we have to emphasise that the wine producing areas within the wine region have different levels of involvement in enological tourism.

END_OF_DOCUMENT_TOKEN_TO_BE_REPLACED

Cooperation at municipality level is a long known solution for the management of existing problems. Creative milieus allow cooperation on the ground of existing trust.

END_OF_DOCUMENT_TOKEN_TO_BE_REPLACED

Within the framework of the study the region’s cultural attraction supply elements connected to the German ethnicity will be analysed and evaluated.

END_OF_DOCUMENT_TOKEN_TO_BE_REPLACED

Thomas Höflehner – Danko Simić – Anna Siebenbrunner: NO SHOT IN THE DARK – FACTORS FOR A SUCCESSFUL IMPLEMENTATION OF COLLABORATIVE HOUSING PROJECTS

The aim of this paper is to detect factors for a successful implementation of collaborative housing projects based on experiences and lessons learned in various Styrian examples.

END_OF_DOCUMENT_TOKEN_TO_BE_REPLACED

Judit Péterfi: A CO-OPERATIVE SETTLEMENT FOR THE UTILIZATION OF THE HERTELENDY CASTLE

A CO-OPERATIVE SETTLEMENT FOR THE UTILIZATION OF THE HERTELENDY CASTLE   Judit Péterfi University of Pécs, Doctoral School of Earth Sciences, juditpj03@gmail.com   DOI: 10.15170/TVT.2019.04.ksz1-2.6   Abstract In the successful management of the...

END_OF_DOCUMENT_TOKEN_TO_BE_REPLACED

Zuzana Palenčíková – Ľudmila Mazúchová: THE ANALYSIS OF THE MARKETING ACTIVITIES OF DESTINATION MANAGEMENT ORGANISATIONS IN SLOVAKIA

The aim of the study is to examine marketing activities and tools used by Slovak destination management organisations in purpose to attract targeted segments of visitors and to improve destination competitiveness.

END_OF_DOCUMENT_TOKEN_TO_BE_REPLACED

The present article studies and introduces the characteristics and activities of the South Transdanubian tourism destination management (TDM) organisations through the results of an online questionnaire survey.

END_OF_DOCUMENT_TOKEN_TO_BE_REPLACED

Vladimir Drozg: THE COUNTRYSIDE OF SVEČINSKE GORICE – WHO MAKES THE LANDSCAPE AND IN WHAT WAY?

The purpose of this text is the geographical presentation of Svečinske gorice hills. We selected six thematic sections: natural disasters in the area, socio-demographic caracteristics of population, changes in cultural landscape, economic structure of the area, quality of living environment and phenomenon of nearby border.

END_OF_DOCUMENT_TOKEN_TO_BE_REPLACED

Andrea Horváth: THE ANALYSIS OF THE ECO-TOURISTIC ACCOMMODATION LABELLING IN HUNGARY AND CROATIA

The eco-touristic labelling system was introduced some years ago in South Transdanubia, Hungary. The highest obtainable rank is the three “hellebores”.

END_OF_DOCUMENT_TOKEN_TO_BE_REPLACED

Wolfgang Sulzer – Ariane Droin: CHANGES IN THE STRUCTURES OF SMALL CITIES – A DOCUMENTATION OF LAND USE PATTERN CHANGES IN SELECTED REGIONS OF THE PROVINCE STYRIA (AUSTRIA)

The paper deals with the documentation of land use pattern changes in selected small urban regions in the Province Styria (Austria).