Bence Závodi – Géza Szabó: THE CORRELATION OF THE FAME OF WINE REGIONS AND WINE GASTRONOMY FESTIVALS IN THE PANNON WINE REGION

University of Pécs, Faculty of Sciences Institute of Geography and Earth Sciences Department of Tourism, fg4t@gamma.ttk.pte.hu

The interest in wine gastronomy festivals has continuously increased in the recent decades in Hungary, as a result of which festival tourism has become a dominant segment of today’s tourism sector. Festivals can have several positive impacts on their destinations, such as the preservation of the culture of the local inhabitants (GETZ 2008). By the invigoration of the cultural life of the location the attachment of the local inhabitants to their settlements is also strengthened, in addition to the improved external image of the destination (LEENDERS 2010). The increase of the touristic attractivity will also improve the satisfaction of the guests arriving at the destination, as a result of which the touristic attraction of the settlement will increase (GRAPPI – MONTANARI 2011). A special type of festivals is made by the ones related to wine, enological tourism and wine gastronomy. HALL et al. (2000) say that enological tourism is more than the simple visiting of vineyards and wineries: it is also about different wine-related events and the participation in exhibitions. In Germany, a country very rich in the traditions of enological tourism, the role of wine festivals is seen in the winning of new target groups (RÜDIGER et al. 2015). RÜCK (2013) defined several advantages of wine festivals, manifested for wineries among others in the direct sales of their high prestige products. For the destination management organisation of the respective area it is the growth in the volume of guests, improved reputation and better image that are advantages. Even local residents can feel the favourable impacts in the increased attractivity of their residential areas.

Hungary has significant traditions related to viticulture and wine production, which is also proved by the increase in the number of wine related events year after year. The Hungarian production areas are classified into 22 wine regions whose total territory is almost 62 thousand hectares. The Pannon Wine Region (Figure 1) involves four wine producing areas: the Pécs, the Szekszárd, the Tolna and the Villány Wine Producing Areas. With the exception of one single settlement (Igar – situated in Fejér county) the whole of the Wine Region is located in the region of South Transdanubia, in Tolna and Baranya counties. The enological tourism (MÁTÉ – SZABÓ 2012) and the wine routes (CSIZMADIA et al. 2012, SZABÓ 2012) of the Pannon Wine Region is crucial in the tourism of the region. 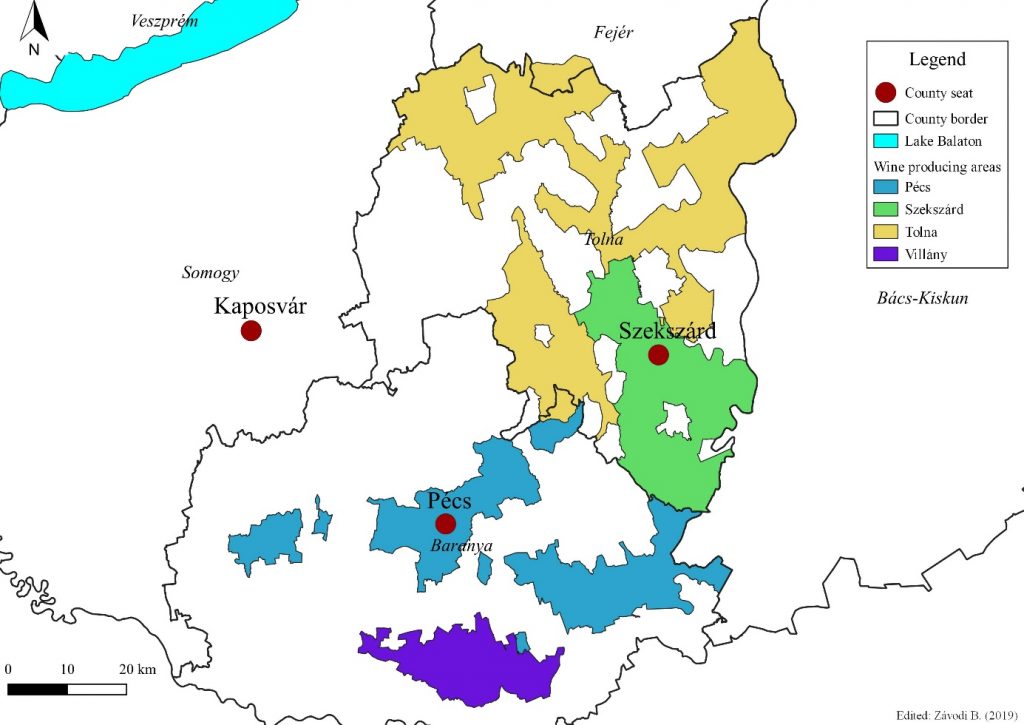 Several activities promoting enological tourism in the Pannon Wine Region have been implemented, such as the organisation of prestigious programmes, establishment of interactive exhibition rooms and museums (OROSZI et al. 2015). According to GONDA et al. (2017), in the area examined wineries also place a great emphasis on the marketing of wines, in addition to the development of the product supply. The result of this ability of renewal is the capacity of the Wine Region to find innovative solutions, and to reposition and market traditional products, in addition to new products and new brands. These factors can contribute to a large extent to the improved reputation of the wine producing area. According to SZABÓ (2010) and AUBERT – SZABÓ (2012) the marketing activity of this wine region is also outstanding which is an important factor regarding the shaping of its fame.

The primary objective of the research is the detection of the correlation between the reputation of wine regions and wine gastronomy festivals in the Pannon Wine Region. In order to reach this goal we must examine the two factors separately, furthermore demonstrate the characteristic features of both the Hungarian wine regions in general and the Pannon Wine Region in particular.

Another complex possibility for comparison could be offered by the examination of awards in Hungarian and international wine competitions, however, despite the prestigious awards, this is less evaluated by consumers in their purchases (SZOLNOKI – TOTTH 2017).

A more effective method in our opinion is the evaluation of the role of enological tourism, and within that wine festivals, attracting the visitors to the production area and allowing the contact with the wines of the production area and the producers. The focus of our examination is thus on the correlations between the wine gastronomy festivals and the reputation of the wine producing areas. During the research several methods were applied so that we could analyse the issue in-depth and from several approaches.

When determining the fame of the wine regions, the reputation of the wine producing areas can be seen as the basis. During the research we collected and analysed population surveys of the last decade and a half made on the reputation of wine producing areas, the consumers’ judgements and the concomitant fame. The oldest national survey was conducted in 2005; the other six analysed surveys were made in a yearly sequence from 2012 to 2017. These researches were made with various methodologies and diverse sizes of samples, and their comparison results in a quasi representative rank. Two main methodology approaches could be seen at the surveys in question (Table 1):

a) sample of 1,000 or 1,500 respondents, compiled by the Hungarian Central Statistical Office, which is representative in several parameters for the population aged over18;

b) questionings of smaller samples (a few hundreds of respondents) or very large ones (thousands of respondents), and internet-based sampling in which the representativeness of the sample is compared to the characteristic features of the respondents.

Table 1: The collected surveys about the fame of wine producing areas

Source: based on collected measurements own editing

We collected the wine gastronomy festivals of Hungary from different sources. The collection of festivals and the related information was done by the analysis of the websites of the wine producing areas and the wine routes, their web 2.0 sites, and the sites of programme promoters of national recognition. These programmes were analysed on the basis of their supply, and then categorised into the thematic types previously created (SZABÓ et al. 2017). The database compiled allowed us to define the major, especially geographical features of the supply.

1. Studies on the reputation of wine producing areas made between 2005 and 2017 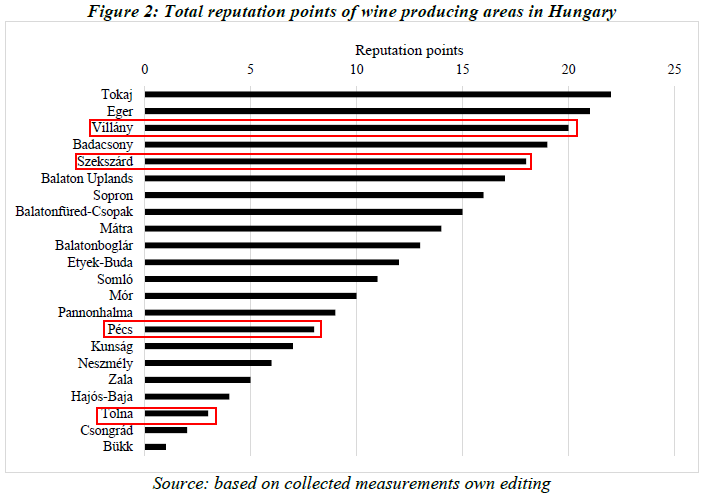 2. The supply of wine gastronomy festivals 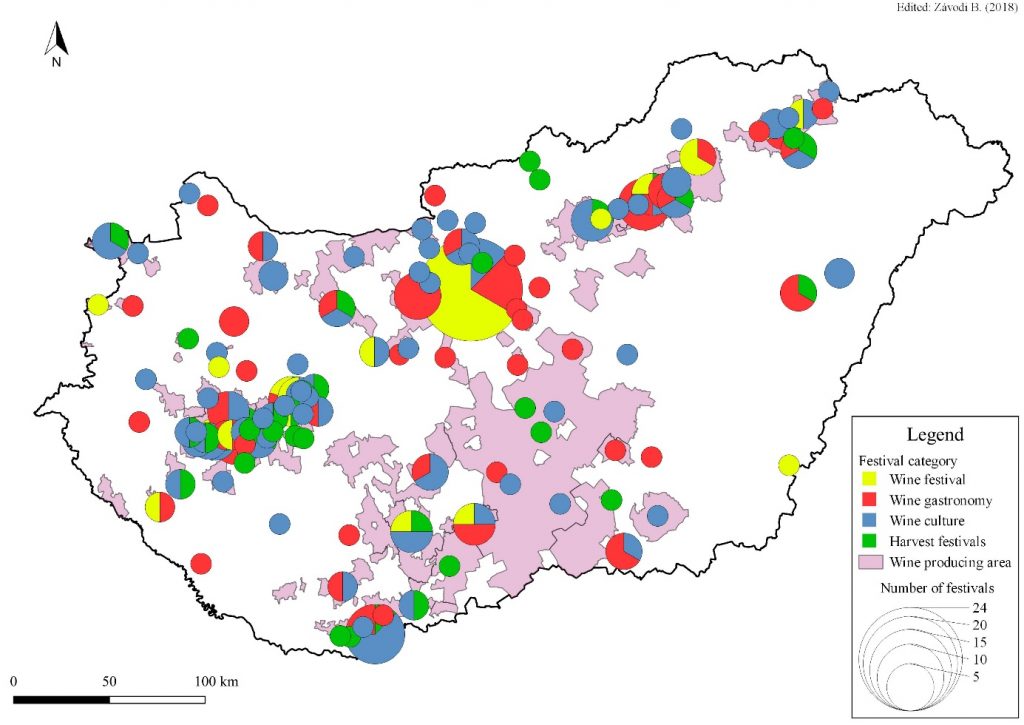 Source: based on online sources edited by ZÁVODI (2018)

The proportions of festivals in different categories within the total of the supply are as follows: 15% are wine festivals, 29% wine gastronomy, 39% wine culture and 17% harvest festivals. Wine festivals are usually connected to the famous Hungarian wine producing areas like Tokaj, Villány and Eger. A significant part of the events in the category wine festivals was organised in the Hungarian capital, Budapest. This city, coming from its size, has a considerable consumer market, which is a guarantee for the demand for and success of such events. The territorial distribution of wine gastronomy festivals is more balanced. The main junction is Budapest and its neighbourhood, and we also have to mention Etyek, a wine gastronomy centre of Hungary. Festivals related to wine culture are primarily concentrated in the territories of the wine producing areas, but the role of wine cities like Sopron, Villány, Eger and Pécs is also determining. Harvest festivals too are primarily linked to wine producing areas, but also in this category we come across settlements (Ópusztaszer, Szécsény) with no enological traditions, still organising such festivals every year.

2.1. Supply of wine gastronomy festivals in the wine producing areas of Hungary 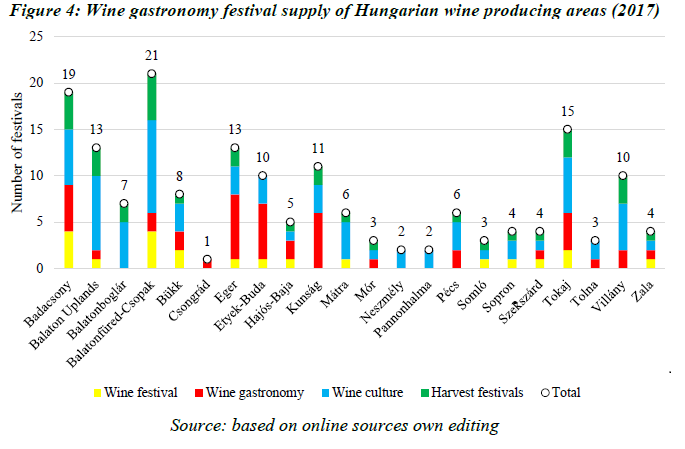 2.2. Supply of wine gastronomy festivals in the Pannon Wine Region 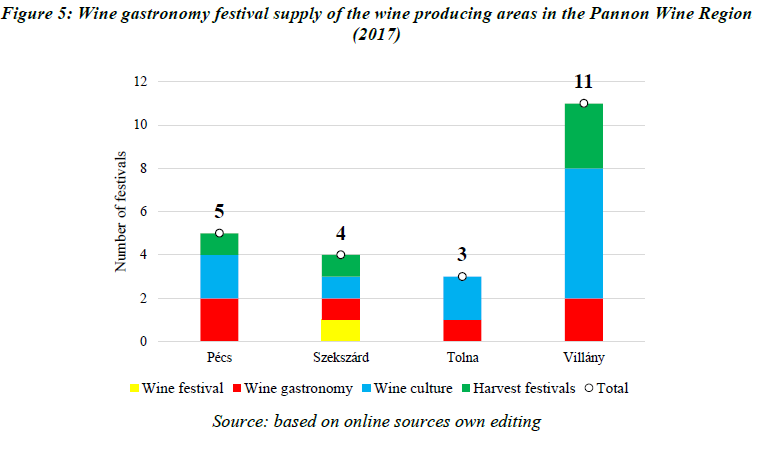 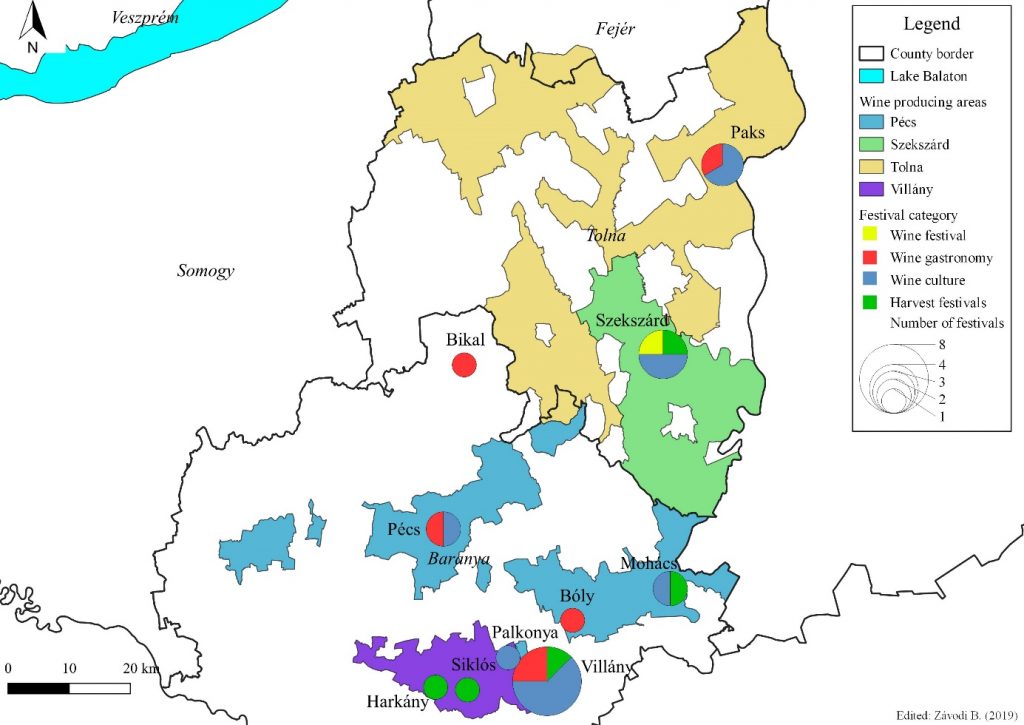 In the Tolna and the Szekszárd wine producing areas it is striking that only two settlements concentrated all wine gastronomy festivals: these are Paks and Szekszárd. Paks organised only three wine gastronomy festivals in 2017, while the number of such events in Szekszárd was four. The supply of the Pécs Wine Producing Area is less concentrated geographically, with two festivals organised in Pécs, two in Mohács and one in Bóly. The Villány Wine Producing Area had four settlements that hosted festivals organised around wine, but only one in Harkány, in Palkonya and in Siklós, whereas the centre of the wine producing area, Villány had eight events. The reason for this is the fact that this settlement is not only the eponym but also the professional centre of the wine producing area. In the destination hallmarked with the names of Harkány, Siklós and Villány it is evidently the latter settlement that is the centre of enological tourism. This is where the necessary infrastructure was created together with the large capacity festival space. The events in Villány attract tens of thousands of visitors, and the conditions to accommodate such large numbers of visitors are mainly given in Villány.

3. Relationship of the reputation of wine producing areas and the supply of wine gastronomy festivals

For the discovery of the correlations between wine gastronomy festivals and the reputation of the wine producing areas we demonstrated both factors (Figure 7). It is clear that there is a correlation between the supply of wine gastronomy festivals in the wine producing areas and the reputation of the areas, but several examples also suggest that this correlation is not always detectable. 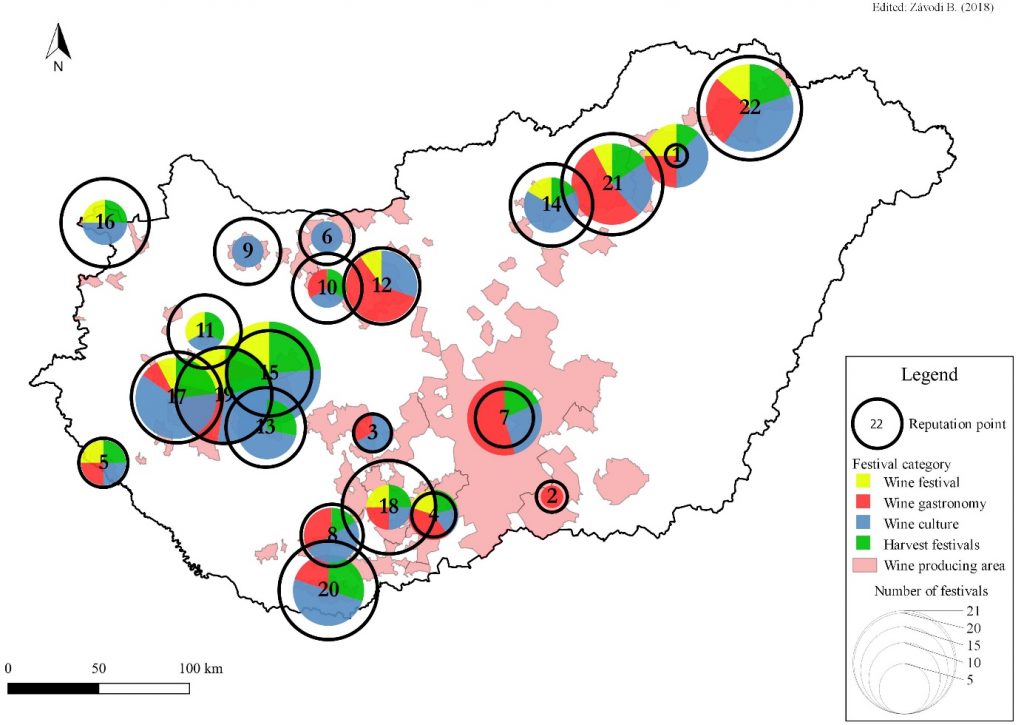 Sources: based on online sources edited by ZÁVODI (2018)

The values of both factors were divided into three parts in accordance with JENKS’s (1967) “natural breaks”. The space informatics software (QGIS 3.4.3) found the natural clusters in the data series, on the basis of Jenks’s formula. The programme identifies the major break points in the data series, taking which into consideration each category includes the most similar values and the differences among the categories are maximised. As regards reputation, the three groups are high (22-14), medium (13-6) and low (5-1). The three clusters created on the basis of the numbers of festivals are high (21-15), medium (15-7) and low (6-1).

The four wine producing areas of the Wine Region all belong to different categories specified above. The Tolna Wine Producing Area has a low reputation and also features a low number of festivals. It is important to remark, on the other hand, that two of these programmes, the National Siller Festival of Paks and the International Gastroblues Festival in the same town have regional attraction and are visited by thousands of people year after year. The Pécs Wine Producing Area has a medium reputation and a low number of festivals. Because of the medium reputation of the wine producing area, not one of its wine related events has a national scope, these programmes are primarily organised for the local inhabitants who make a considerable consumer market. The high reputation of the Szekszárd Wine Producing Area is coupled with a low number of festivals, but it must be mentioned that the number of visitors to these programmes and their scope are outstanding in the enological tourism of the Wine Region. The Szekszárd Harvest Days is a programme with decades of tradition, attracting visitors from all over the country and their number is estimated by the organisers at approximately 50-60 thousand. Considering that the Wine Producing Area is open to new solutions and new products, it may gain further advantages in the future by the organisation of some innovative and novel programmes. The high reputation of the Villány Wine Producing Area is matched by a high number of festivals, including smaller-scale programmes in addition to the festivals attracting tens of thousands of visitors. The Villány Red Wine Festival is one of the large-scale events of the Wine Region with tens of thousands of visitors, with a national scope. This festival too has decades of traditions now.

This publication/research has been supported by the European Union and Hungary and co-financed by the European Social Fund through the project EFOP-3.6.2-16-2017-00017, titled “Sustainable, intelligent and inclusive regional and city models”.